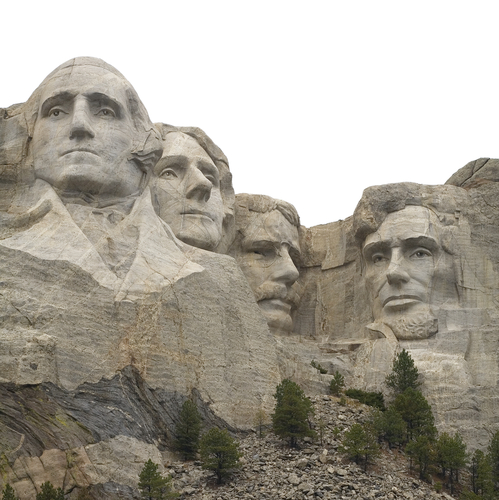 In honor of Presidents Day, we thought it would be fun to explore the dental history of some former US presidents.

George Washington – Growing up, we always thought that George Washington’s false teeth were made of wood.  Scientists have proven this theory untrue.  Washington actually had several sets of ill-fitting dentures made of various materials, including hippopotamus ivory, sea lion ivory, and lead, as well as teeth from pigs, cows, elks, and humans.

John Adams – President Adams had an incredible sweet tooth, which contributed to the loss of his teeth.  However, this was not the only factor.  Adams was in the habit of inducing vomiting to cure other ailments. He refused to wear dentures, and this led to difficulty speaking.  After encountering a fellow senior citizen, Adams wrote: “He is above 80. I cannot speak, and he cannot hear.  Yet we converse.”

Thomas Jefferson – President Jefferson wrote, “I have not yet lost a tooth to age.”  Historians have now proven that Jefferson did not divulge the whole truth.  In 1808, he endured a severe jaw infection that was most likely due to a decayed and infected tooth.

Abraham Lincoln –Lincoln had an extreme fear of the dentist.  The root of his fear stemmed from a dentist breaking part of his jaw while extracting a tooth, without anesthesia. Later, when he suffered a tooth infection, President Lincoln sniffed a container of chloroform prior to the dentist pulling the tooth!

Woodrow Wilson – A photo of President Wilson taken during his inauguration revealed that he had astonishingly bad teeth!

Ronald Reagan – In 1977, President Reagan endured extreme left-sided jaw pain.  It was proven that he had degeneration of the temporomandibular joint, and he was treated with a cortisone injection.

Thanks to modern dental science, our current and future presidents will not have to endure the pain their predecessors endured – and neither should you. If you need a dentist in the Atlanta area, call me, Dr. Peter Pate at Dentistry in Buckhead. My team and I will address all of your dental concerns, from toothaches to cosmetic dental issues, and we’ll partner with you to create a treatment plan for lifelong dental health.